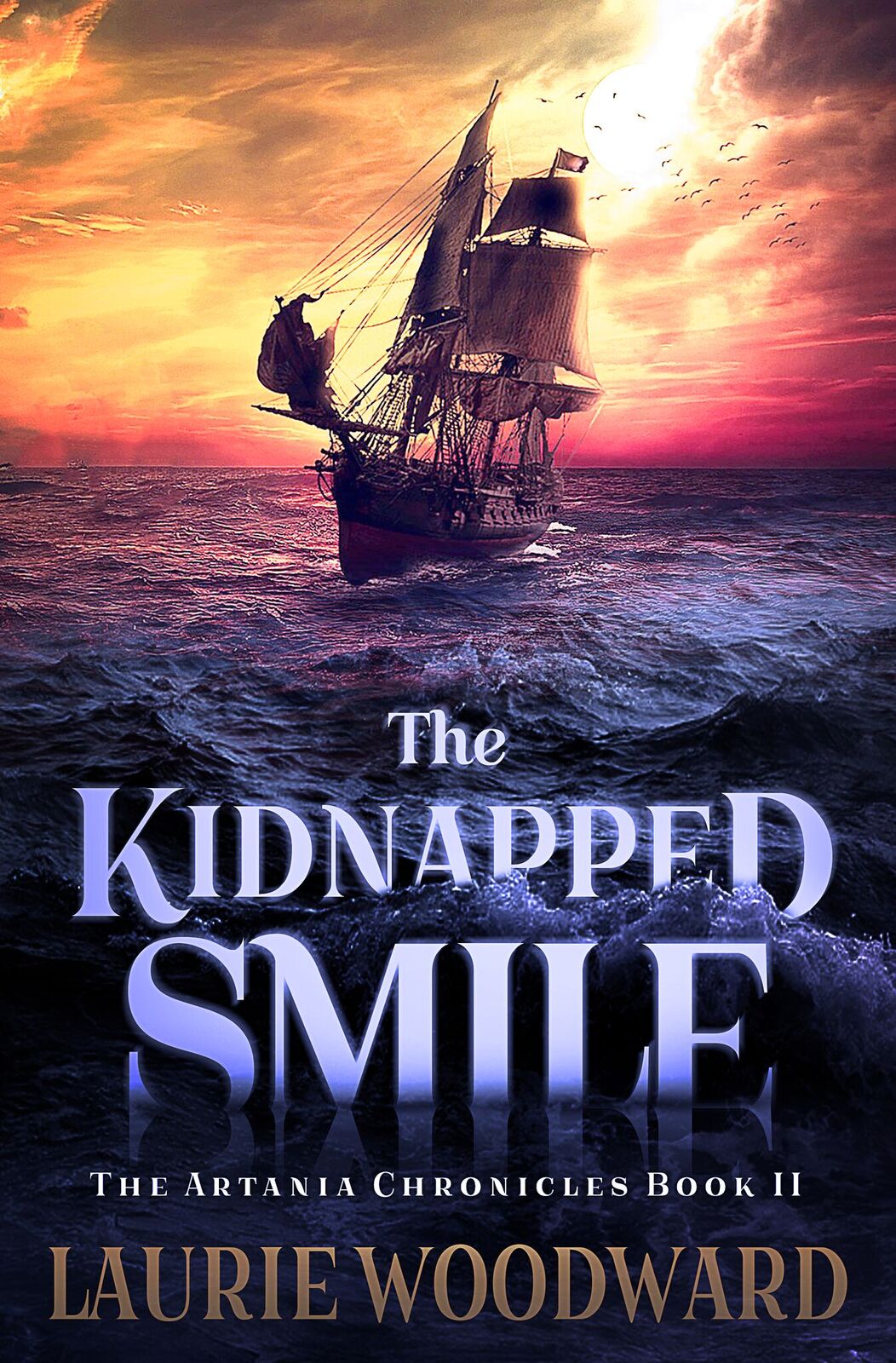 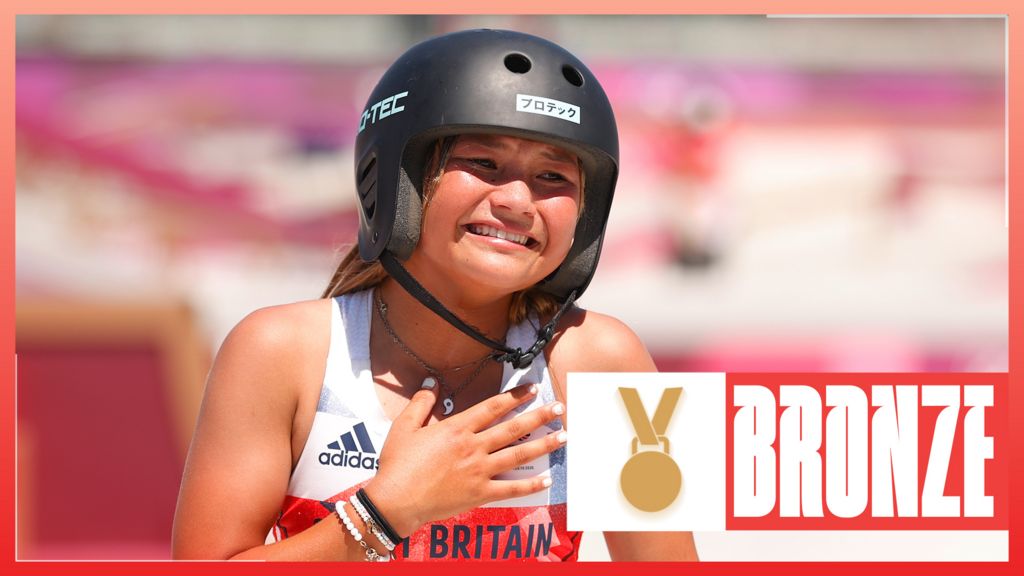 Do you love reading about or watching strong girls? Young women who kick ass in sports and life? I sure as shit do. And one sport that is a friggin blast to to watch is skateboarding. Long a male dominated discipline, it has changed in recent years. Women now skate and compete in greater numbers than ever before. This year the categories of park and street skating for men and women were added to the Olympics.

What is the difference? Park skating is done on a course that resembles a bowl. Skaters launch themselves off the sides of the walls in 45-second runs and perform tricks that are judged by a panel of five judges. Skaters get three 45-second runs per round, and the judges grade them on a 0-100 point scale. A skater’s best score of three is the qualifying score.

Street skating is judged on a street-like course that includes handrails, slopes, curbs, benches, and walls. Here skaters perform tricks over the obstacles while a panel of five judges scores them on a 0-10 scale . Each skater gets two 45-second runs and five tricks, and judges rate the tricks. The highest and lowest scores for each run and trick are dropped, and the remaining three scores are averaged.

There are many admirable athletes competing in this year’s Olympics, but for me Sky Brown inspires the most. Not only is she the youngest ever to compete for Great Britain, but her journey to Tokyo has been a difficult one. Just a year ago while practicing vert, she fell fifteen feet onto flat concrete. Injured horribly, the twelve-year-old drifted in and out of consciousness with multiple fractures to her skull, a broken left arm, multiple broken fingers, and lacerations to her heart and lungs.

Four days later she had her full memory back, was smiling at her father, joking with doctors ,and watching TikTok. Doctors described her recovery as a miracle attributing her ‘grit, positivity and attitude.’ On to the Olympics, she won bronze for women’s park skateboarding. Go girl!

As I read about this inspirational young woman skating vert, dropping in down the side of the ramp to do Fakies, Rock and Rolls, Axle Stalls, and Kick flips I found myself all choked up. Then I thought, we need inspirational people like her. That is why I created the character of Gwen Obranovich for my Artania Chronicles series. She is a lot like Sky. Tough. Strong. Willing to push beyond to learn a trick.

A skater girl and heroine who battles monsters in an art created world.

Let’s hear it for strong girls and women! 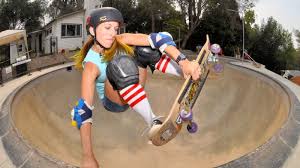 Lately I’ve been skateboarding in my mind. Escaping to a place where whirring wheels spin beneath my feet.  And a Canadian maple deck flexes under my weight. I’ve been kicking ever faster with my right as my left balances on scuffed grip tape that’s curling and torn at the edges. I find a place where worries disappear and no one is standing with crossed arms in judgement. Wind whips my hair back as I approach the fourteen-foot high vert ramp and dip the nose over the coping.

For a moment I turn my my face upward to the Southern California sun.  Feeling it warm my skin while I plan the series of tricks I’m about to perform.  Frontside 180. Fakie. Hurricane Stall. Backside Rock-and-Roll.

Then I drop in, rolling down the half-pipe, bending my legs and extending my arms in ways I never have before. One trick. Two. Seven. I am laying it down like Tony Hawk or Shaun White. I am no longer a teacher with papers to grade or an author with chapters to finish.

I am airborne, off to that skateboard in my mind.

Laurie Woodward is the author of  several novels including Forest Secrets, and the fantasy series The Artania Chronicles. She also cowrote Dean and JoJo: The Dolphin Legacy and was a collaborator on the popular anti-bullying DVD Resolutions. Bullied as a child, Laurie is now an award-winning peace consultant, poet,  and blogger who helps teach children how to avoid arguments, stop bullying, and maintain healthy friendships. She writes on the Central Coast of California.

Links to her books can be fund here: Laurie’s Amazon Page 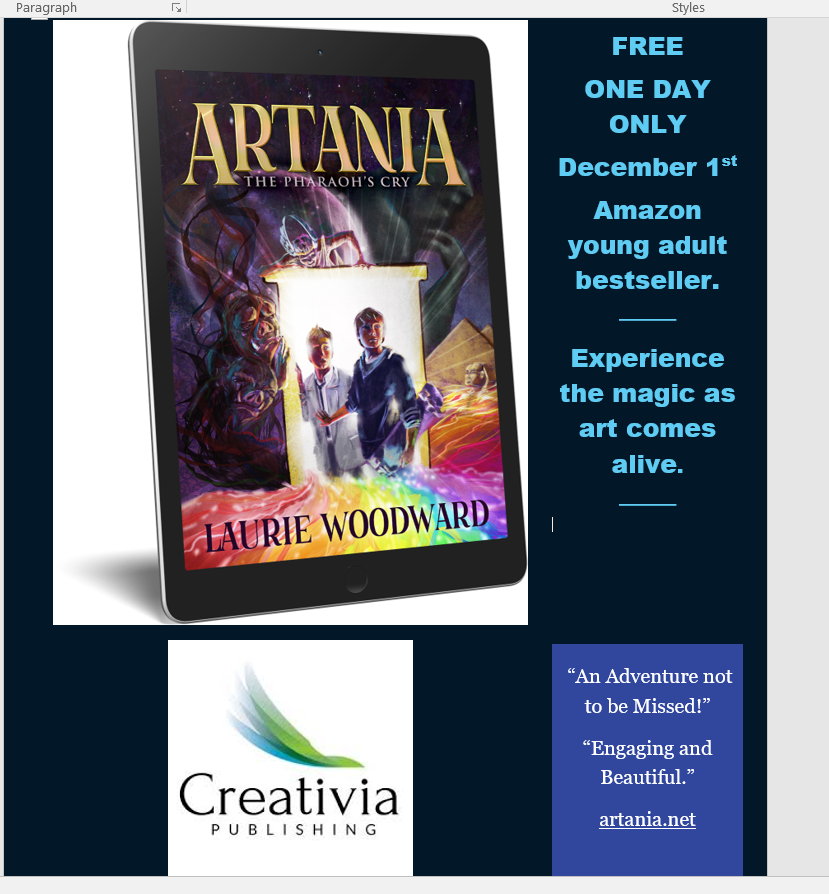 Here’s what people are saying about Artania:

“Really?” you ask with a playful twinkle in your eye while clicking on the following YouTube video. “I guess you’ve never heard any myths from ancient Egypt.”

Video about the Egyptian gods

Exchanges like the above are one of the reasons I wrote, Artania: The Pharaohs’ Cry. When I taught 6th grade I found very few tie-in novels that brought both the history and mythology of ancient Egypt alive. Yet, their myths were so cool. Battles, revenge, love, sacrifice. All fodder for a roller-coaster ride into an imagined past.

Now your child can learn about the gods and history of Egypt without ever saying boring. Instead they’ll ride on skateboards with Bastet and Horus, journey through the pyramids with Osiris, and grin at Anubis shaking his tail. What are you waiting for? Magic is about to begin.

Alex gripped his skateboard even tighter and tried not to think of how high the ramp was. So what if it was fourteen feet straight down? As dorky as his gear looked, with elbow and knee pads, a helmet and even wrist guards, at least he was protected.  All Mom’s idea but he didn’t care what other kids thought. In 6th grade he’d almost lost her and now he’d wear an elephant costume if it meant keeping her weak heart from worrying.

Anyhow he’d skated in rocky caverns with slime-covered monsters in hot pursuit and lived to tell the tale. This was just Santa Barbara. Okay it was the Volcom Games with hundreds of people watching and he’d only been skating vert for nine months. But still his life wasn’t in danger.

He glanced at the audience below and saw his skateboarding buds, Jose, Zach, and Gwen, give him a thumbs-up. Not easy acts to follow. They’d each wowed the crowd with backside airs, fakies, and real clean kick flips. Alex raised three fingers for a quick wave wondering if his best friend had been able to make it, but Bartholomew’s white suit was nowhere to be seen.

“And next we have thirteen year old Alexander Devinci in his first competition. Give it up for the Southern Cal Kid.”

Heart pounding, Alex stepped up to the ledge. He tried not to look down as he set the board’s tail over the coping. When he saw the dizzying height he took a deep breath and forced himself to anchor the wheels in place with his back foot. Closing his eyes, he imagined that he was safe at home standing in front of his easel, paintbrush about to create wonder.

And he was there. Ready.

Like a furious hand slapping paint on canvas he stomped his front foot and dropped over the vert wall. Wind whooshed past his face causing the few curls that had escaped the helmet to whip and tickle the nape of his neck. His eyes narrowed as his wheels rolled ever faster.

He hit the bottom of the ramp ready to scale the other side when the doubts began.

Were his feet in line with the bolts on deck? He’d fallen buko times over the summer because of bad foot placement, ripping five pair of jeans, scraping his knees and arms, and even dislocating his shoulder. Mom wasn’t too thrilled about that but since he’d called Dad to take him to the hospital she only had to deal with it after the joint was back in place.

The glare of summer sun on the vertical blinded him for a moment. Blinking, Alex shifted his weight and tried to remember all the tips Gwen had given him about rolling up the transition. On the ascent Alex tried to gauge his speed. Was he going fast enough for the backside ollie he planned to do over the rail?

“Go Alex, rip it!” Gwen cried from the crowd.

With a quick nod Alex aimed his board at the sky. He’d lay it down just like Tony Hawk or Christian Hosoi.

“This Santa Barbara kid is holding his own,” the commentator announced over the loudspeaker.

Higher Alex rolled, aiming straight for the lip. Everything was perfect.

He looked up. There, amongst the wispy clouds he saw something red shimmering. No, it was a sparkle. A glistening reflection off of the underbody of a creature.

The creature opened its long snout in a plaintive wail.

Dragons over Santa Barbara? What the?

And that’s when he fell.