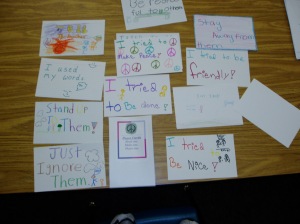 If you’ve ever been frustrated trying to break up kids’ arguments, here’s a tool you might want to try. I’ve been using this for about four years in my classroom and find it really works.
Why?
It empowers children to come up with solutions themselves.

Before you ask kids to make a Peace Card I believe that it’s important to teach them the three types of conflict resolution.

What are the steps and what will you need?

I usually invite a student to role play these choices with me, overacting in a silly way with overly exaggerated gestures to get them to laugh about how ridiculous it is to punch a kid (for aggressive behavior) or to shrink away with a Charlie Brown voice (for passive behavior.) Then we role play the assertive no demonstrating the effectiveness of standing up for yourself peacefully.

Step 4) Write three headings on the board

Ask students to give examples of when they’ve experienced each and record their responses.

Step 5) Show students examples of Peace Cards. Go over good choice examples written on the back. Then Pass out index cards and invite children to make their own positive choice for conflict resolution. They draw and write a caption for a good choice.

Step 6) Collect. Place inside a basket or a box in a easily visible place. This will remind the       class of positive choices for the future. Tell students that if they ever have a conflict with another child in the future they can make a new card or share an existing one with him/her.

Follow up: Now whenever students have conflicts that do not needing serious intervention by an adult, tell them to use these tools. Have the disagreeing children discuss how to come up with a win-win situation and then invite them to make Peace Cards about how they could handle the situation better.

You’ll be surprised at their solutions.
Good luck!

“The two main purposes of class meetings are to help each other and to solve problems,” Jane Nelson says. According to William Glasser, the American psychiatrist who developed Choice Theory, class meetings are a time when “the teacher leads the whole class in a non-judgmental discussion.”

Amongst the guidelines were a list of dos and don’ts. For example, blame or put-downs were not allowed. These meetings were a place to solve problems, listen to the person speaking, and give each child a voice.

The next day, I told my students to get in a circle then pulled out a wooden mallet.

“This is the talking stick,” I said, holding it up. “Only the person holding it is allowed to speak. While he or she is sharing, everyone is quiet and listening. Remember we are talking about feelings, not tattling or name calling. When someone is finished sharing a concern with you, either say, ‘Thank you for sharing,’ or apologize. No arguing back and forth.”

Seeming to savor the solemnity of a grown-up meeting, the kids nodded, sat up straight, and waited with folded hands.

I then explained that I had concerns about rule breaking and wanted to create a better class community. I turned to one boy in my class, whose name is changed to ‘Cole’ below for privacy.

“Cole, I feel upset about the choices you have made lately. You have thrown things, chewed gum, and disturbed kids trying to work.”

Cole’s face blanched at first but then he lifted his gaze to meet mine and mumbled a sincere apology. Recognizing how difficult that was for him, I gave Cole a congratulatory nod before passing the stick to the next child. I said that he/she could either share with “I feel” messages or pass. Many chose to pass but what surprised me was that the children from the most troubled homes were very open to sharing. Students faced those who had bullied them and said how much it hurt. The bullies apologized and thanked the speaker for sharing. Two girls, who had been arguing and talking behind each other’s backs, spoke about how much they missed each other. Even a couple of my shyest students spoke up to say how they felt about name calling.

On the second pass around the circle I focused on problem solving having each child say; “I know we’ve had problems in the past but I’d like to__________.”  As they filled in the blanks, I was amazed that every single child said they’d like to be friends

At the end of the meeting, I thanked them all with the reminder that this was a special time for our class, not something to gossip about. They could share it with their parents but aside from that, what was said in a class meeting was private.

At the next gathering I was thrilled to discover how much better they’d been getting along. Those who had been gossiping were now sitting next to each other with their arms draped over each other’s shoulders. There wasn’t a single report of bullying.

Fortunately, Sister Maria Elephant never did show up. Oh sure, there are still days when my students push it. But when things start to feel out of control, I gather everyone in a circle to remind them that they have a choice. They can continue letting the bullying and disruption continue, or they can use their words to effect change.

I have found that when children are given the right communication tools, they can rise to the occasion. I think one of my students put it best in a pen pal letter she wrote; “We used to have bullies in our class but now kids are being nice. We know we have the power to make peace.”