“You broke my heart ’cause I couldn’t dance. You didn’t even want me around.”

Do You Love Me (Now That I Can Dance) by The Contours blasted from the loudspeakers as my fifth graders waited to break out and boogie. On one side of the stage the boys bowed on one knee and sang along. On the side the girls the girls crossed their arms no.  But with the next line of, “And now I’m back to let you know, I can really shake ’em down,” they all leapt into the air and shook their hands.

This was my ninth year choreographing a dance for my class and as usual the introduction was met with groans and complaints. “It’ll be embarrassing,” Jackie said. “No way,” Devon protested. “I’m going to be absent that day,” muttered Juan.

When they’d finished their little diatribe I said what I always do. “Everyone participates. With respect. And you will 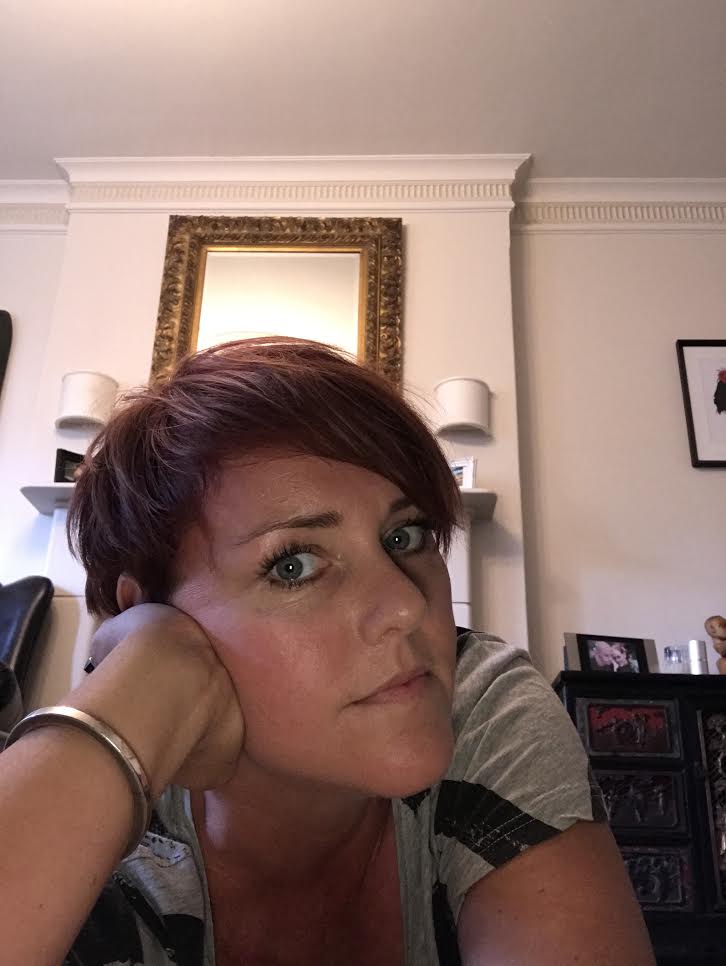 The other day I was looking on Amazon for books that might be similar to Forest Secrets and happened upon an author whose work I just had to share with all of you. Jade Harley is self-confessed rebel who wants to inspire girls to stand up for what they believe in and protect the environment. Go girl!

She recently released her first novel, The Adventures of Lola, which follows thirteen-year-old Lola’s journey to save her town before disaster strikes. As Lola struggles to remain in the good graces of the people in her life, she starts to realize just how unique she truly is and the magic she held inside all along.

Who or what inspired you to be an author?

I’ve always been creative; my first job was as a singer and I studied performing arts but most recently I’ve worked in the media industry. I had never considered writing a book before but my circumstances changed, I was no longer happy doing what I was doing, my company went out of business and suddenly I had this character in my head, keeping me up at night. The only way to get some sleep was to start writing her story, so you could say I didn’t get much choice in the matter. Once I started writing I realized how much I loved it.

Your author biography says you are a fierce conservationist. How do you use this passion to inspire your writing?

I have been a vegetarian since I was twelve, way before it was commonplace. As I’ve got older I’ve become more educated on the complex issues that lead to deforestation, climate change, and animal extinction and I’ve realized that the only chance we have of saving this planet is by ensuring widespread education on these issues. I hope that my books can encourage a love of the natural world and the desire to protect both the environment and the myriad of amazing creatures that depend on the planet for their very survival.

What inspired The Adventures of Lola? Is there a takeaway that you want young readers to have after reading?

There was no inspiration, Lola was just very insistent about telling her story. I am merely the channel, she is in control. I hope that young readers escape reality for a while, (after all that’s what a good book should do) and hopefully become more interested in the world around them. It’s a big beautiful world and I want them to explore it.

Do you see yourself expanding into other genres?

Maybe who knows what will happen in the future! But for right now, I’m working on my second book and a range of coloring books and eco-clothing, watch this space…

If you were only allowed one book, what would it be and why?

What advice would you have for aspiring writers?

Just write. Starting is the hardest part and once it’s written be ready to learn a lot, writing is just the beginning, the real work starts trying to market it and reach your readers, I’m learning daily.

If you could send one message to your fans, what would it be?

Be in love with the adventure of life. 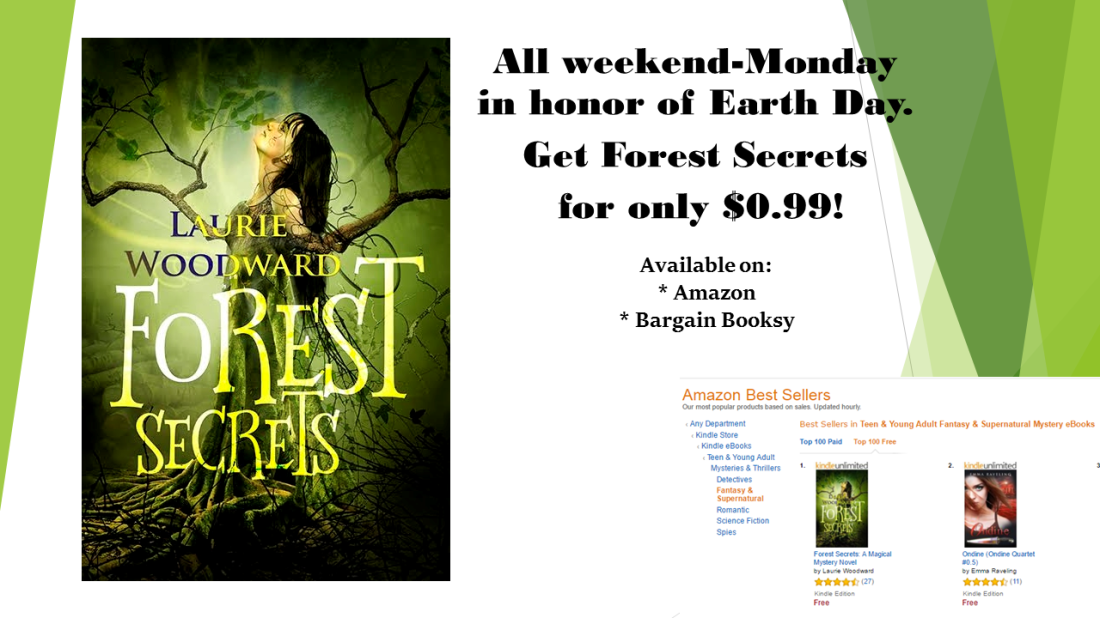 This weekend I am offering my environmental fantasy book for just $0.99. That’s less than a latte, an ice cream cone, or even a gallon of gas.

C. Hilts five star review said, “I might be a grown-up, but I enjoyed reading this to my daughter as much as she enjoyed listening. A  whimsical tale of adventure that teaches the importance of saving our environment for future generations.” 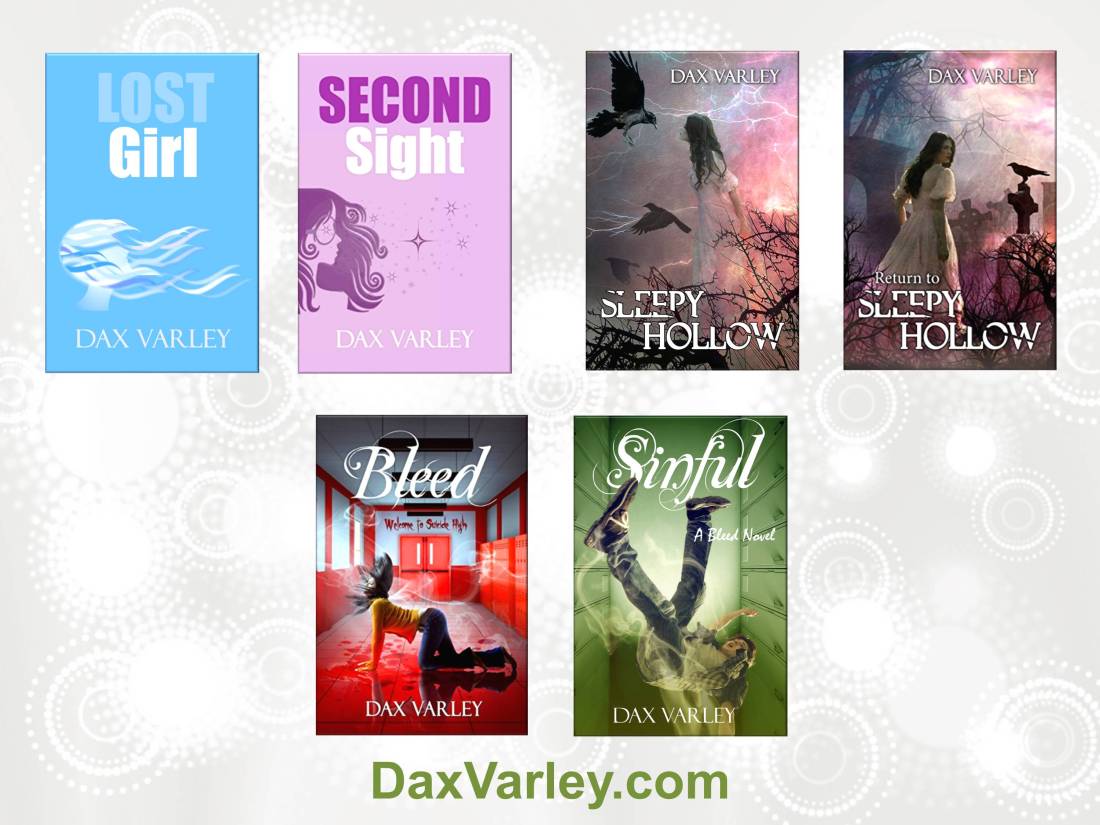 Fantasy YA author, Dax Varley, loves writing books she wishes were around when she was a teen. These thrilling fantasies take her readers on journeys where love is found after an encounter with the Headless Horseman, a girl’s job in a New Age enchantment shop leads to real spells, and a glass of water tells of a mystical lost girl.

When I recently contacted her about a biopic, she offered, “How about the top 10 reasons I write?”

And here they are:

Are you a shy author like me? Do you find it challenging to put yourself out there to get interest in your books? Are you afraid that you will become that annoying salesman that everyone avoids? If so, one way to create interest is to make a fan page on Facebook

It’s easy. All you have to do is Click on “Create” and then “Page” from your home page. Next you will be asked to choose from an icon menu. I chose “Brand” but “Entertainment” works just as well. Now you set up your page just like your FB profile, link to your books, and wallah you are ready to invite friends to like it.

Give it a try. You won’t even sound like that annoying time share salesman you listened to in Hawaii just to get a free snorkel trip. I promise.

Know your #JamesBaldwin | Mic News — “I am not your negro.” 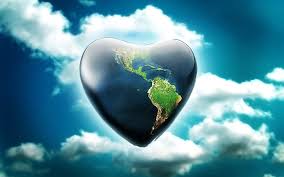 I was chatting with a young lady recently who was very excited about a new job opportunity. It was in the medical field, paid well, offered training and provided excellent benefits, in many ways the dream career choice.

Fast forward two months. This woman has now gone through training with top scores, learned the medical procedures to gently administer care to patients, and is ready to begin as a full-fledged practitioner. But there was one problem: her co-workers. None of them had kind words of encouragement, offered assistance, or comforted her when she was distraught when a patient died. On the contrary, these employees reported her every little mistake and tear over the suffering patients to the management.

Net result? She quit. She could not work in an environment with no emotional support. And that business lost a big-hearted individual who brought smiles to people in extreme pain.

I, on the other hand, work in a school where the staff respects and supports each other. We share lesson plans, behavior strategies for challenging students, exciting innovations and most of all empathize with each other when times are tough. For example, when I recently had a neck injury, my co-workers jumped in to help out my substitute, offered assistance, and sent me kind get well wishes. It honored me to be part of a group that truly had my back.

Now I’ll admit, teaching is a rewarding job in and of itself. Daily you see young minds growing and that is quite different from dealing with people in pain. Still there are things that we have done that I believe help to build teams.

Step into Another Person’s Mindset Jim Ziolkowski’s National Bestseller Walk in Their Shoes: Can One Person Change the World? details his life changing experience. A business major, he had planned to go into a corporate career. However, while backpacking through Nepal in his senior year, he discovered how simple kindness and caring can change people’s…

via Footsteps: An Activity for Developing Empathy — Teach Peace Now

Okay, I’ll admit it. I wasn’t always this confident teacher and writer, wearing her freak flag like a badge of honor. Back when I was a kid, I was the naive one that brought her Scooby Doo lunch box to the first day of junior high. And that set me up for years of ridicule. From, “Dog” to “Freak” to “Your face makes me vomit,” my days were filled with absolute torture. And I never said a word, just shrunk further into myself, believing their every word.

But now I’ve found my revenge, in writing. Every one of my novels has some sort of bully who teases, taunts, lies, and cheats and a misunderstood character trying to navigate through life. As my heroes find courage within themselves, they realize that the bullies only have power if it is given.

For example, in Artania III- Dragonless Sky 13-year-old Gwen, who has always reveled in skateboarding and working out, begins to try to mold herself into the populo group’s image.

“Yuck,” Gwen muttered. Nothing on her face seemed right. Her lashes were so blonde you couldn’t see them. Her lips were as pale as the toilet. And her green eyes could have been the ugly tiles on the floor.

With a long sigh, she laid a long swathe of lip gloss on before lining each lid in fluorescent blue. Next, she squeezed in cheeks and brushed pink streaks up each one. Almost passable. She thought.

The tube of black mascara popped open with a snap that surprised her so much she almost dropped the wand. Catching it just before it tumbled out of her hand she lifted it slowly to her face and began to apply coat after coat of Midnight Black. She looked in the mirror and blinked. Weird, like tarantulas framing her eyes.

Gwen held the mirror at arm’s length barely recognizing the stranger peering back her. She suddenly got a déjà vu feeling. An image from a memory, or maybe a nightmare tugged at the edges of her consciousness. What was it? She tried to summon it, but all she got was a vague feeling that this mask protected her. As if makeup would save her from something horrible.

Just then the mirror shimmered and her image blurred. The glass rippled and seemed to melt. Unable to look away, Gwen gripped it tighter.

When her face came into focus it looked just like it had before. And that face terrified her.

“What the–?” she gasped dropping the compact.

“You okay in there?” a familiar voice sneered.

Lacey. Oh no! Gwen scrambled to pick up her mirror and shove it in her backpack. Zipping it closed tightly, she smoothed her skirt, put on a placid smile, and opened the stall door.

“Oh my gosh,” Gwen said, trying her best to imitate Lacey, “Someone must have been a total spaz.  T. P.’s on the floor. Gross.” She kicked at the imaginary mess on the floor and crossed her fingers behind her back.

“Probably some seventh grade cronk,” Lacey said. Then she smiled. “Look at you! Love the skirt and that eye shadow.  The cream!”

“Thanks, wanna borrow some?” Gwen suggested letting out the breath she’d been holding.

As the weeks go on, Gwen tries ever harder to fit in with Lacey’s crowd, but deep down she knows it’s not who she really is. I went through the same thing as a kid, trying desperately to make those bullying girls accept me. In the end, I forgot who I truly was.

That’s why I wrote this line of the Artanian Prophecy.

Our world will be saved if their art is true.

I’ve learned that when we are true to who we really are, bullies don’t matter quite so much.